@. ≠ 4 Part II — A Crapton of Unfair Snap Judgements about Seattle that I Will Undoubtedly Later Regret

Continued from Part I – “Why?”

PROGRAMMING NOTE: I’ve been sitting on this post for a while. Nothing really controversial about it. It just sucks. The writing sucks. This kind of linear narrative without a subtext of humans and human frailty doesn’t make for good blogfodder. It’s not my thing. I guess I’m out of practice writing, but I’m working on it. 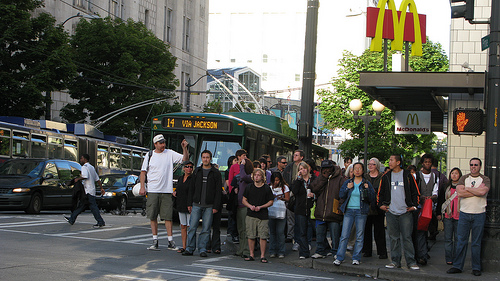 Seattle is the anti-Tampa. The two cities are photo negatives, as one might expect from two cities that are as geographically disparate as two cities can possibly be in the Lower Forty-eight. Apparently I’m told they do have nice weather in Seattle, but that was in the summer, before I got here. I take the locals at their word, perhaps it isn’t dreary all the time in July.

Florida is a level wash of flat limestone, a bicyclist’s dream though hardly anybody in Florida bicycles. Seattle is a bilious texture of roller coaster transitions, very San Francisco-ish, pure torturous hell for a bicyclist in a city where everybody bicycles. Bicycles are everywhere. There are public bikes that you scan with your phone. Once you scan the QR code, the wheels unlock and the app charges a paltry $1 an hour. You can’t beat it. Between the hills and all the extra ground I cover walking between bus stops, my calves are starting to look like cantaloupes. My Fitbit is so confused, it has started sending me texts warning me to return my wristband from whomever I stole it. 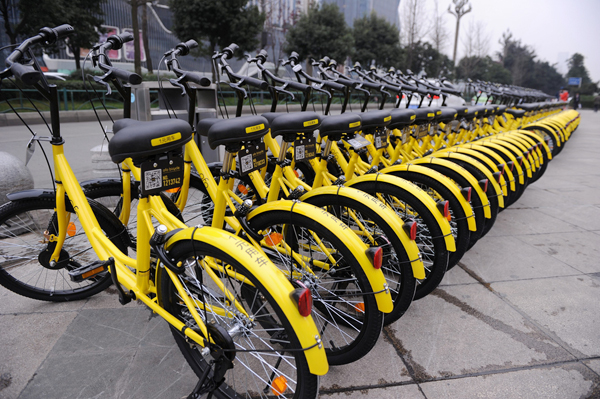 Tampa roads are wide and meticulously groomed. Seattle roads are narrow and pocked with potholes. Must be the a factor of the climate that the concrete dissolves faster here.

Tampa is rather clean, overall. Seattle has a definite litter problem, and not just downtown. Everywhere. This baffles me. Is this some kind of passive-aggressive “acting out” by all these environmentally aware Liberals? I don’t get it. The litter makes no sense. 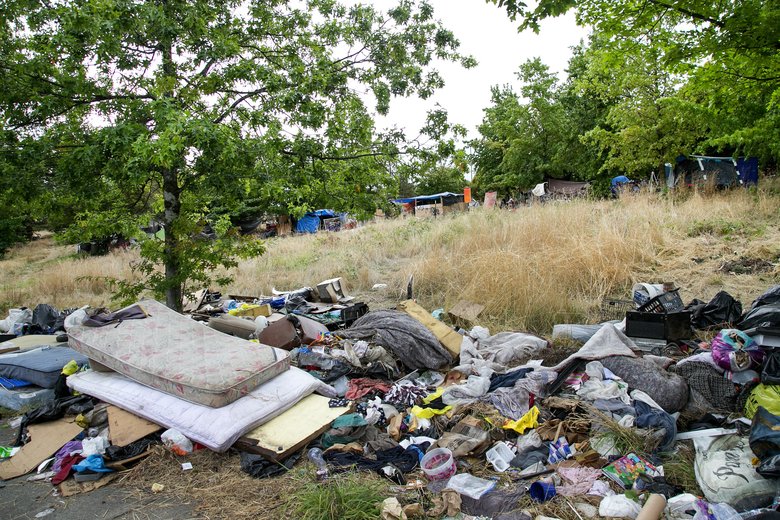 Tampa homeless people keep to themselves. Tampa has a lot of homeless people, but they just amble along, pushing their shopping carts filled with crap and slowly transitioning from human being into ambulatory giant leather sock. To borrow a term-of-art from my wife’s days of working at a mental hospital… Seattle homeless people “broadcast.” There are more broadcasters in downtown Tampa than media day at the SuperBowl. There are a lot of conversations with invisible people going on here. There are a lot of people on the bus and huddled in the bus stop shelters who are nonsensical motormouths, yammering away. Some scream. There’s one lady on my bus route who meows like a cat being stepped on at regular intervals.

Tampa traffic is ridiculous. Seattle traffic makes Tampa look like a scene from The Omega Man.

And on the flip side…

Lot of fucking assholes in Tampa. Sorry, but it’s true. (One fewer, at the moment!) Many of the recruiters and hiring managers I dealt with in Tampa were dicks. The locals in Tampa tend to be passive-aggressive. The drivers there are self-important and there is zero courtesy for a turn signal or a merge. Never forget that Tampa is actually the southernmost borough of New York City. Goombahs in board shorts.  The influence of the influx of NYC asshole transplants on Tampa culture cannot be overstated.

Folks in Seattle are super nice. I mean SUPER nice. Like, Wisconsin-level nice.

My first hour in Seattle, I ran around to the XFINITY retail stores, trying to pick up a kit they said I needed to set up my internet. There was some kind of XFINITY employee event going on all over the city and all of the XFINITY stores had closed early. In desperation I went to a Comcast kiosk at the mall that was open. Andrew at the kiosk did not have an internet kit, but he asked questions and realized I didn’t really need an internet kit. He gave me some free cables and a customer service number to activate my router. Bingo. Before I walked away I told him that he had made the mistake of being helpful and I had another question. Where could I get the ORCA card used for the busses? Surely there was a retail store where I could pick one up. Nope. Had to order them through the mail and wait. Crap.

But then Andrew reached into his wallet and pulled out his ORCA card and gave it to me. “I just bought a car. I don’t really need this any more. It only has about $8 on the card, but that’ll get you wherever you need to go for a while, anyway.”

I tried to charge the ORCA card online, but there is a two-day delay between when you add funds online and when the credit shows up on the physical card. I realized while standing downtown between bus routes that I had run out of Andrew’s generous credit. I asked a woman waiting at the bus stop if there was some machine somewhere where I could charge my ORCA card with dollars. She left her bus stop and walked me three blocks to the terminal where I could charge the card.

“Meh. There’s always another one,” she said.

I could do many more laps of minor variations on this theme. Lots of hyper polite bus etiquette, including the adorable meme of everybody thanking the bus drivers before getting out. Nobody steps out into traffic without looking, as if they have a ring of Jesus fire protecting them from impact. Everybody waits at a crosswalk until they get the walk light, even if there’s no traffic in sight. Super sweet servers and bartenders and chatty grocery store checkers. For a guy like me who values politeness and bemoans the death of courtesy, Seattle is heaven. Really. It’s awesome. My co-workers are super nice, too. (More on that to follow.) I had a dear friend assure me that Seattle courtesy was only skin deep. But yaknow what? Even if it’s only one-sixteenth of an inch of thickness better than Tampa courtesy. I’ll take it. Call me a relic, but I fucking miss the Midwestern courtesy of my youth.

Perhaps Seattle courtesy is the Seattleites’ collective balm for the sucktastic geography of the city; the steep hills, and the dreary Pacific weather, and the unfortunate terraform that fractures the city into a bunch of ersatz islands that render cheap suburban rent impossible and getting anywhere in a hurry laughable. The map of Seattle looks like somebody dropped a six-piece box of chicken tenders on an azure rug. There’s no place to absorb growth where some other tech company hasn’t already planted a flag of their own. Starbucks has the southern half of downtown. Amazon has north downtown and Puyallup south of SeaTac. Costco has Issaquah and half of Kirkland. Google has Freemont and the other half of Kirkland. Microsoft has Redmond. There’s no elbow room left for the worker bees to live and housing zoning is actually moving in the opposite direction; towards fewer apartments to accommodate the crushing influx of workers, not more.

If you want to buy a house, half a mil will earn you a spot in a bidding war for 800 square feet of craptastic fixer upper, but the city thinks there’s too much housing.

Which brings us from the macro to the micro in the story of my relocation journey next time in the next chapter of @. ≠ 4 Part III – Transitions